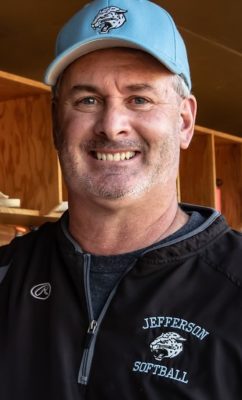 Rob Giesen enters his 4th season as varsity head coach.
Rob is a native of New Prague where he was a 3-sport athlete.  He captained both the basketball and baseball teams and was an all-conference pitcher and catcher. Rob played college baseball at the University of St. Thomas competing as on outfielder and relief pitcher.  After college, he began his coaching career as a men’s amateur baseball coach and girl’s basketball coach.  He served as the varsity head basketball coach at St. Louis Park for six years.

Rob has coached softball for the BFA and is currently a head coach with the Clutch Hitters club softball program.  After graduating with a degree in business administration, Rob has spent his entire career in management and is currently the Vice President of Operations for Encompass, an engineering firm in Minnetonka.  Rob, his wife Renee, and daughter Lauren have lived in Bloomington for the past 16 years.  Lauren plays softball at the University of Wisconsin-Superior.

Rob Giesen is pleased to announce the following members of the Jags 2022 coaching staff: